Like most apps on the internet, the stuff that I write at Showroom Logic has scheduled tasks that must happen in a predictable fashion. In our case, we have some reports to run and deliver. Our app, like lots of internet apps, is distributed and runs in a Docker container on Amazon's Elastic Beanstalk. So, what are our options?

cron's been the go-to solution for this type of problem for some years. It's simple: you edit a file to give it the schedule, tell it what program to execute, and BAM! Instant scheduled tasks! Unfortunately, it wasn't this simple for us.

cron isn't great for distributed apps. How do you handle concurrency? Do all machines in a cluster attempt to run the task with some sort of central locking? Do you just schedule the task on one machine and hope that particular machine never dies? cron is great for simple, single-machien apps, but has issues once the topic of distribution of work is broached.

It turns out that running cron in Docker containers is not easy. For one, many people use environment variables to configure their containers, which can be problematic: these variables are often not visible to the command that cron schedules. I once used this guide, which was great, but commenters mentioned this flaw. At my company, we often use environment variables to store things like database credentials for use in Django, so this kind of hurt. How am I supposed to run a Django command on a regular basis if these variables aren't visible? One answer was to wrap cron with a Python script, but this seemed like a lot of work and over-kill. No, thank you.

Since it's not practial to expect every machine in a distributed environment to try to kick off some process, I decided that maybe it was best to have an external agent to call into our app to start a process. Imagine for a moment that some central scheduluer machine, running cron, called a special URL in my app. This could be something like, https://my-app/admin/start-daily-processes and it could be secured with some sort of token authentication so that only designated callers could trigger it. This solves the first problem (the distributed environment), but not the second one (cron doesn't play well with Docker).

I took a look through AWS's documentation and took a look at Lambda. Lambda would allow me to write some piece of code, perhaps something to make a web service call, and to not have to worry about how it's called or where it's run. This sounded good to me for a few reasons:

How would I trigger this thing, though? Well, it turns out that Lambda and CloudWatch have an answer to this:

Here's the dialog to schedule the event: 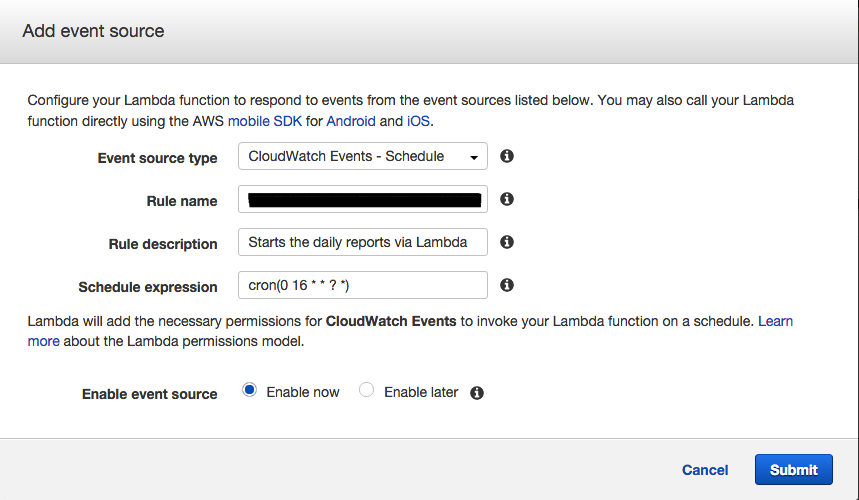 Here's a screenshot of the rule in CloudWatch:

Fortunately for the user, Lambda will have links to the CloudWatch rule and vice versa. This makes management pretty easy. By this point, I had some Lambda that could tell my app to start processes that needed to run on a regular basis.

I had the following problems:

This has the following advantages:

It also has the following disadvantages:

We're new to this approach, so while I wish that I could write about it being rock-solid even after the end of Earth as we know it, I simply can't. What I can say is that this feels much more natural than cron and has served us well so far.