I decided a bit ago that it was time to clean house.  I have a lot of old tech stuff that I have been holding onto for quite some time.  The majority of it was still in good working order, which is why I was so hesitant to let it go.  Instead of throwing it all away or keeping it in my closet, I decided toeBay a bunch of it off.

All in all, it's been quite the pleasant experience.  I've sold an item on eBay before, but this was my first time selling a ton of crap.  Posting the items was easy once I had taken a few pictures.  Getting messages and notifications was easy using the eBay Android app.  Shipping was easy because most of my items were small, so I just defaulted to using the USPS flat rate boxes (especially since the boxes were free!).  The USPS allows you to print out your own labels and to save a few cents (which add up) for not making them do it in their retail locations.  Once I had everything packed and labeled, I just had to walk it down to the Post Office, which is all of 5 minutes away, drop it off, and use my eBay app to mark the items as shipped.

Once I got the hang of the process, it became pretty fun.  There are some other things I'm trying to get rid of, so I'll be selling for a while.  eBay even gave me a gold star! 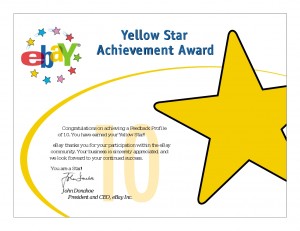